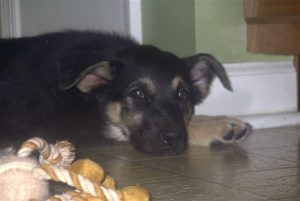 The sooner the better! Actually, very responsible breeders start training their pups as young as 5-6 weeks, so by the time they are placed in homes they already have a good start. Your puppy starts learning the moment he first sets foot in your house. You might as well make sure he learns the right things from day one.

Peaceable Paws accepts puppies in classes starting at age 8 weeks. The only reason we don’t take them sooner is that we want them to have at least two of their puppy shots for protection before they start romping with their classmates. At one time, when most trainers used choke chains and prong collars, puppies didn’t start classes until they were at least six months old, because of the potential for serious damage to a puppy’s tender trachea, occasionally even resulting in death, from the use of those force-based tools. Now that more and more trainers are using gentle, positive training methods, we have no fear of harming a young puppy, and we can start them at a very early age. We start new 7-week classes every month at Peaceable Paws, so you never have to wait more than a few weeks to get into a class. If you don’t want to wait even that long, we can schedule one or two private sessions to get you started on the right training path until the next class begins.