Animal forensics DVM Melinda Merck’s rising star has recently taken a meteoric crash as a result of a couple of very high-profile animal cruelty cases gone wrong. There have been a lot of blogs and articles accusing her of either jumping recklessly to conclusions, or deliberately misconstruing forensic evidence in order to seek convictions against alleged animal abusers. Merck is director of veterinary forensic sciences for the American Society for the Prevention of Cruelty to Animals. She also co-founded a widely-hailed veterinary forensic science training program at the University of Florida. As one of the country’s most prominent forensic veterinarians, […] 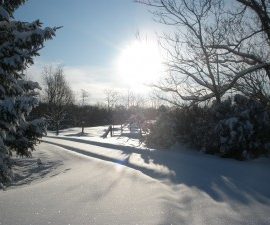 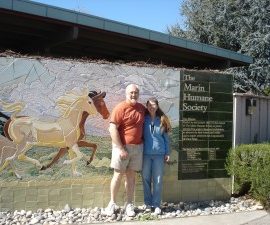 One of the things I do in my “spare time” is to write short articles about Pet Law for Examiner.com. From time to time I submit Legal Briefs for which I mine the Internet for reports of animal abuse and cruelty cases and present a short synopsis of some of them. While doing this recently I ran across two articles that stuck me as particularly noteworthy. Marinated Cat The first one was just bizarre. Gary Korkuc of Cheektowaga, New York (near Buffalo) had adopted a cat from a local shelter. Sunday night, Buffalo police pulled him over for running a […]

You just never know what surprise is waiting around the corner. I was wrapping up a private consult at about 5:30pm yesterday when one of our 6pm class students arrived and informed Shirley that there was a dog in a carrier halfway up our driveway. Since our drive is about a half-mile long, there’s no chance this dog crate bounced out of the back of a passing pick-up truck; someone must have left her there deliberately. PPaws apprentice Jenn Rutter and I hopped in my van and drove down to investigate. We found the world’s most adorable 12-week-old Westie pup […] 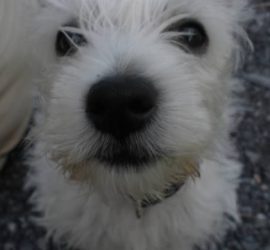 No-Kill Animal Abusers This week a Friend on Facebook posted a link to an animal cruelty case involving a “so-called no-kill” “rescue” organization, the Humane Sanctuary of Kinsman, Ohio, that had (allegedly) badly neglected the animals under its care. On Friday, February 12, 2010 the Animal Welfare League of Trumbull County (AWLTC), the county sheriff’s department and other agencies executed a search warrant at this facility and impounded one hundred sixty-two dogs, 18 cats, two horses and multiple fowl and chickens. The woman (not) caring for the animals has been charged with nearly 200 counts of animal cruelty. The photos […]