Exhausted after completing our last Level 1 Academy for the year… so why am I up at 5am on a Sunday morning? Well, clocks turned back at 2am this morning, so it’s really 6am and my internal clock just doesn’t get the message that fast. And besides, there are horses and dogs to feed, a dog-hike on the schedule, and blogs and articles to write. Not to mention laundry to do. Might as well get up instead of lying in bed trying to convince myself to sleep in another hour…

Had a great week with a terrific group of dog trainers hailing from Alabama, Missouri. New Jersey, Virginia and Maryland. Several ROTFL moments – the best was about the Humane Society of Washington County’s 2004 impoundment of 126 color-dyed Easter chicks. I can’t explain, you had to have been there. 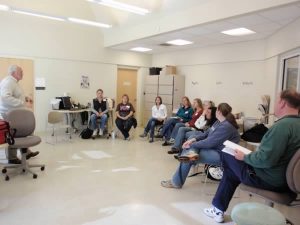 Paul Miller, Executive Director of the Humane Society of Washington County, and my wonderful husband, speaks to the class before their Day 1 tour of the shelter

As always, it was a brain-and-body exhausting and fulfilling experience for all concerned, and as always, I was immensely impressed with what our students are able to accomplish with their shelter dogs in just 6 short days. To see dogs go from “distracted wild-child” behavior on Day 1 to rapt and focused attention on their handlers on Day 6 brings tears to my eyes every time.

Here they are in all their glory:

Lulu Brooks (former marine mammal trainer and high-scoring graduate of this Academy) from Montgomery, Alabama, and brilliant but very high-energy 4-month-old “Olivia” – described by the owner who surrendered her to the shelter as an “Afghan Hound mix” – we think more like Border Collie mix: 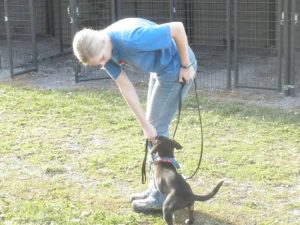 Melissa Noyes from Woodbridge, Virginia (where she has a pet-sitting business and does Pit rescue), with Moose, a delightful 4-month-old Pit mix: 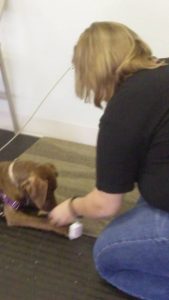 Melissa teaching Moose that “Trade” means “Human taking away high-value object (peanut butter-filled hoof) makes good stuff happen – and then I get the hoof back!”

Diana Foley from Gaithersburg, Maryland, fulltime shelter worker in the behavior department (and they are lucky to have her!) with sweet Gina, a 5-6 year-old Pomeranian – one of 5 found running stray in a “pack” (take a moment to visualize!) in Hagerstown. Diana was a trooper – ended up working with 3 different dogs during the week (for various reasons) and took it all in stride: 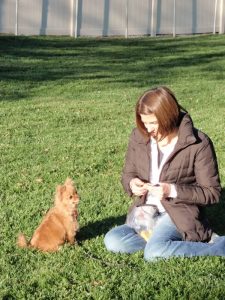 Beth Joy, Peaceable Paws Apprentice and future dog training business owner, with the fun-loving Miniature Pinscher Hope. Beth, who found it took two weeks to get her own Min Pin to lie down for a lure, was delighted to be able to lure Hope into a down on Day 1 of the Academy. 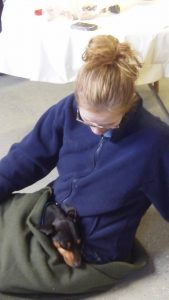 Beth snuggles with Hope during a training break

Julie Cortino of Hagerstown, Maryland, Customer Service Supervisor at the Humane Society of Washington County, and the brilliant, attentive and calm 4-month-old Labrador Retriever, Koda. The shelter sends an employee to every Level 1 academy, demonstrating their commitment to education for their staff and the importance of understanding dog behavior. 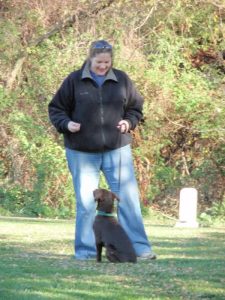 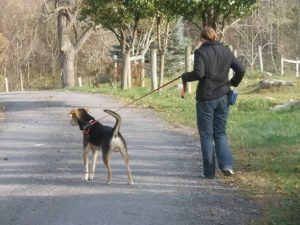 Kelly, heading out with Zeke on one of the daily morning hikes on the farm to benefit from the value of exercise before working with dogs in the training center.

Violetta Abalova, high scorer on the practical final, and the exuberant Lab/Doberman mix, Java (a good name for him, since he appeared to be mainlining caffeine…). Violetta, too, has her sights set on becoming a professional dog trainer. 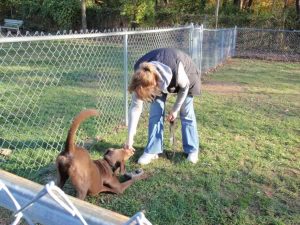 Debbie Gugliuzzo and the incredibly handsome Husky mix, Toby. Debbie is a part time shelter worker, and would love to work full time with dogs: 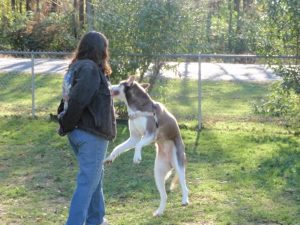 Debbie discovers how much energy Toby has!

Here’s the class photo, taken on Friday after a week of hiking, training, and learning about the scientific principles of behavior and learning. On Saturday, students take their written and practical finals. Stress! 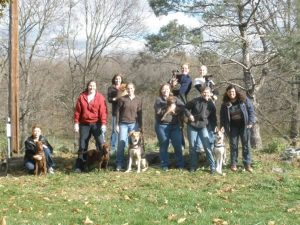 Left to right: Violetta and Java, Julie and Koda, Diana and Scooter, Kelly and Zeke, Melissa and Moose, Beth and Hope, Lulu and Olivia, me, Debbie and Toby

And here’s the group walking back to the training center after the class photo shoot: 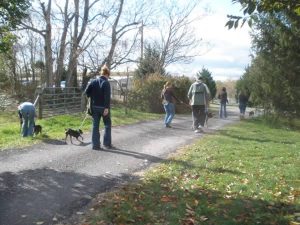 Left to right: Violetta and Java, Julie and Koda, Diana and Scooter, Kelly and Zeke, Melissa and Moose, Beth and Hope, Lulu and Olivia, me, Debbie and Toby

And now, the moment you’ve all been waiting for – the answers to the “Where in the World is Pat Miller” contest, and the announcement of the winner: 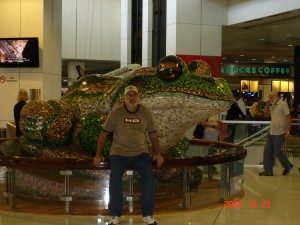 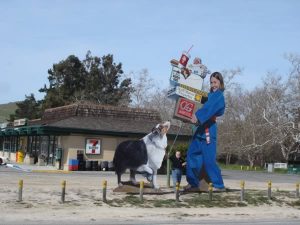 Photo #2: Paul Miller standing in front of ginormous Aussie/Girl cutout – Toro Park, Hwy 68, Salinas, CA. Martial Arts girl (martial arts studio in shopping center); art by John Cerney. Cerney creates each work through a series of photos, laying a grid for enlargements that are scaled to 3 times the original size. He then transfers the images to larger squares on sheets of 1″ paper-surfaced plywood. He cuts out the figure and paints them using acrylics. The figures are then braced with steel and set on embedded timbers to withstand wind. There are incredible cutouts all over Salinas, depicting various scenes of people engaged in activities. 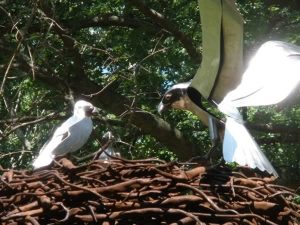 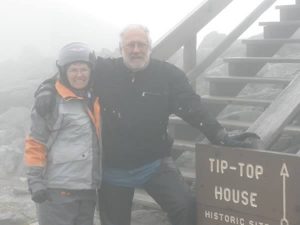 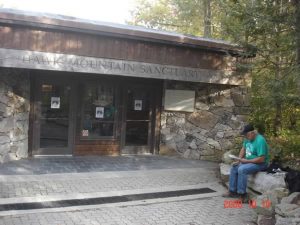 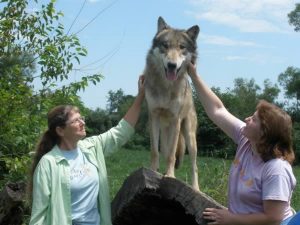 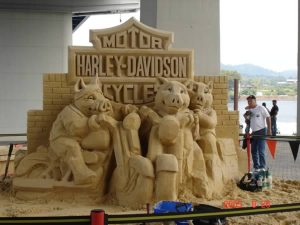 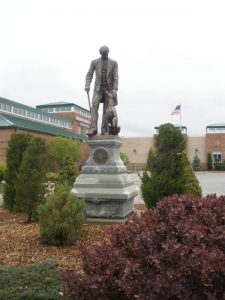 Photo #8: Wisconsin Humane Society – Milwaukee, WI; The statue is of Henry Bergh, the father of the humane movement in the United States. A New York ambassador, Henry Bergh, horrified at the sight of horses beaten in the streets, organized the American Society for the Prevention of Cruelty to Animals (ASPCA) in April, 1866. The Wisconsin Humane Society is located at 4500 West Wisconsin Avenue, Milwaukee, WI. Wisconsin Humane was the first shelter I ever visited, as a girl living in Mequon/Cedarburg – although at the time it was a small shelter in danger of falling into the river. 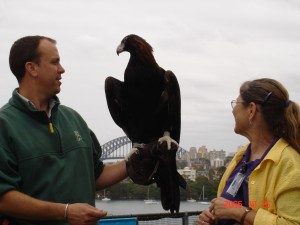 Photo #9: Taronga Park Zoo – Sydney, AU; October 2006, during the trip when I was invited to speak and we went over for the APDT-AU conference – Pat with Wedge-Tailed Eagle 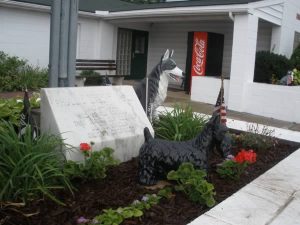 Photo #10: SPCA of Luzerne County – Wilkes-Barre PA; June 2010 – Memorial to Phyllis Wright HSUS and animals that served during military campaigns. Celebrates a legend in the animal shelter world for improving conditions and setting precedents like spay/neuter.  She was Chief of Dog Training for the US Army during the Korean War before joining the HSUS. 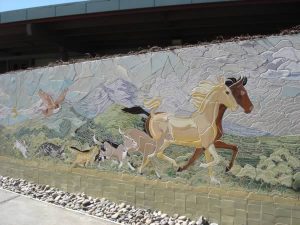 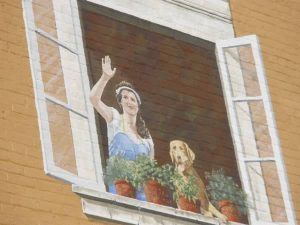 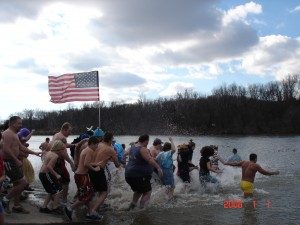 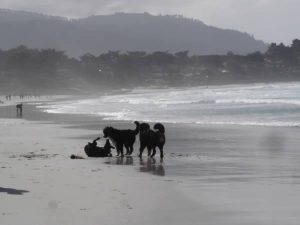 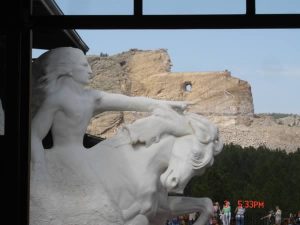 Photo #15: Crazy Horse – SD; Crazy Horse Memorial in the Black Hills of South Dakota, on our 2008 motorcycle ride to Sturgis and beyond (6,000+ miles!).  It’s a model of the eventual carving in the mountain that is a work in progress (in background). Memorial being created by the Ziolkowski family

And the winner is… (drum roll)… my friend Margaret Hughes!!! Margaret and I worked together at the Marin Humane Society. I haven’t seen her in over 10 years, but we found each other on FB recently. Margaret wins her choice of a $100 certificate toward any Peaceable Paws event held here at Fairplay, Maryland, or a set of signed (5) Pat Miller books.