Okey Doke – I promised you a follow-up on the Westie pup left abandoned in our driveway, so here it is. Never let it be said I don’t keep my promises… 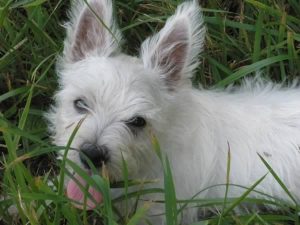 Maggie spent the week while we were on our biker vacation happily making friends at the Humane Society of Washington County. They assessed her at the end of her stray holding time, and found that she was friendly, outgoing, resilient (as in nothing rattles her) and very quick to use her mouth. They weren’t sure if she was using it aggressively or not, so were not willing to make her available for adoption immediately at the shelter. I also wanted to explore her alleged crate-soiling behavior, as reported by her previous owner, who said Maggie absolutely refused to eliminate on grass, and would only urinate and defecate in her crate. 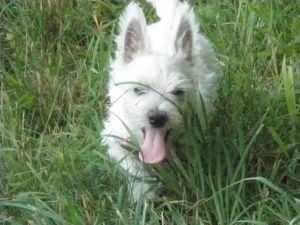 I can *walk* in grass just fine!

I’m convinced that the previous owner who dumped her here incorrectly identified Maggie’s intense play-growling (while tugging on pants legs) as aggression, and hence applied the inappropriate (inappropriate response even if it was aggression) remedy of grabbing and holding her muzzle closed. Since the previous owner had also received more bad advice (“Don’t ever play tug with your puppy”) and Maggie is dying to tug, the pup’s only outlet for this highly desirable behavior was to grab pants legs, and yes, human hands. Ow! Ow! Ow! Ow!

As soon as we offered her appropriate tug toys her pants and hand grabbing greatly diminished. Even now, just one week later, if she occasionally goes for clothing or skin we just have to replace the inappropriate object with an appropriate tug toy and she’s a happy camper. Easy Peasey. (See my “Rules to Tug By,” below)

We also worked on teaching her to offer sits and take treats without grabbing flesh. Ouch! 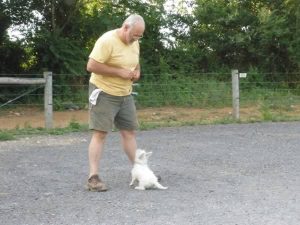 Sit for a treat… 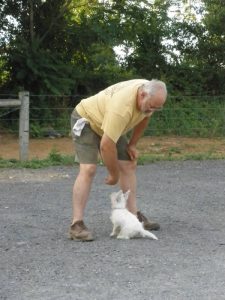 Oops! If you grab, the treat disappears! 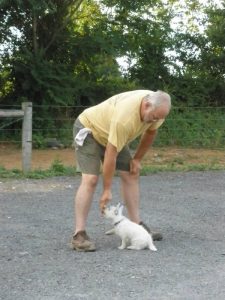 Yes! If you’re polite you can have it!

As for the housetraining issue – no worries. She has happily pooped and peed on grass since her first day here. She makes every effort not to soil her ex-pen, has never soiled her crate (we put her food, water and toys in her crate) and pees on the grass as soon as we take her outside. Go figure. 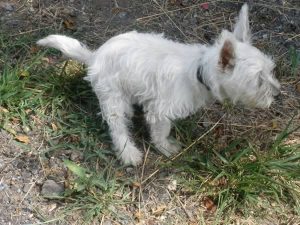 Guess what? I can poop and pee in grass just fine too!

In fact, she’s had a wonderful week hiking around the farm, helping with barn chores with the Miller pack (Scooter hates her) and Sturgis, and soaking up attention from Shirley and all the PPaws apprentices. 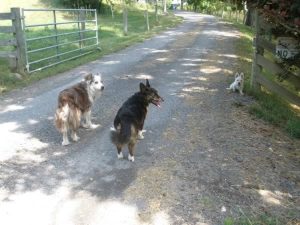 Hiking on the farm with the big dogs 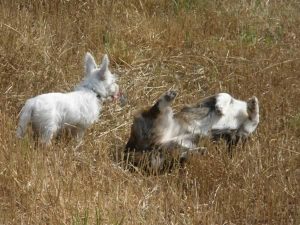 Waiting her turn to roll in deer poop 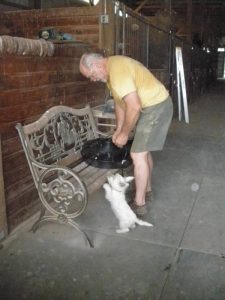 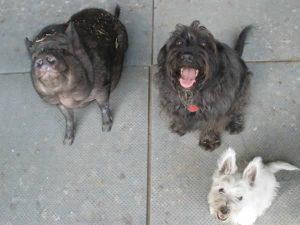 Hangin’ with Bonnie and Sturgis

So – she doesn’t need the Gold Paw program – there’s nothing to fix. They should all be so easy! Westie Rescue is coming to pick her up on Saturday, and she will be off to her new life, hopefully in the hands of someone who has a better understanding of normal puppy behavior and can give her the lifelong loving home she deserves. 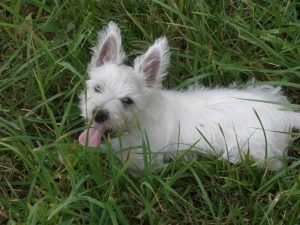 Have a great life, Maggie Faith!

RULES TO TUG BY 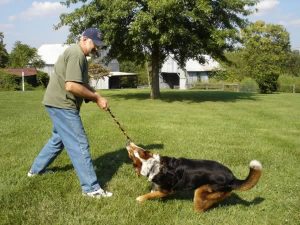 I’m always surprised to hear there are still trainers who think “Tug” is a bad game to play with dogs. My dogs think it’s one of the best! Granted, there may be an occasional dog for whom I wouldn’t recommend it, but as a professional dog trainer and behavior consultant, I often suggest Tug as an appropriate and effective way to help a high-energy, under-exercised dog work off steam. Most of my peers in the positive training world agree.

We also agree that it’s a good idea to have rules by which to play the Tug game, to ensure that you’re reinforcing appropriate behaviors and not rewarding inappropriate ones: