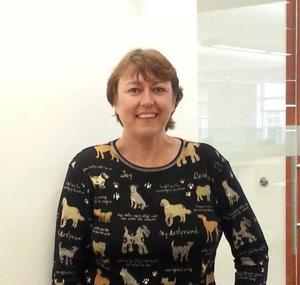 Michelle has a BA in Psychology and a Master of Business Administration from the University of Missouri. She has been training dogs since 2009 when she volunteered at an animal shelter.

While working at the shelter she discovered that adorable puppies adopted today  were  often returned within a few months as unruly adult dogs. The bad behavior  was  typically due to a lack of appropriate  training or lack of timely socialization. Often these “bad” dogs were euthanized.

In 2010, Michelle completed the Assistant Trainers course offered by the Greater St. Louis Training Club, and learned the magic of positive  reinforcement dog training. Ultimately R+ training is about teaching  pets and their people how to communicate with each other. In 2013, Michelle completed the Karen Pryor Academy Dog Trainer Program, and in 2014, she earned her Animal Welfare Certificate through the St. Louis Community College. In 2017 she completed the Fear Free Animal Trainer Certification.

Michelle is a member of the Pet Professional Guild, the Association of Professional Dog Trainers, and Fear Free Pets whose mission is “to prevent and alleviate fear, anxiety, and stress in pets by inspiring and educating the people who care for them.” She lives with her three rescued pups, Ava, Lily and Oreo.