Lest you think that everything Paul and I do is animal-related, this week’s blog is about mushrooms and music. Okay, maybe with a few dogs tossed in for good measure… 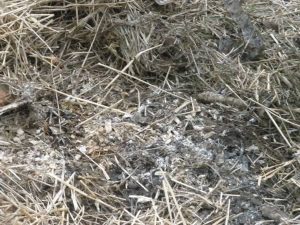 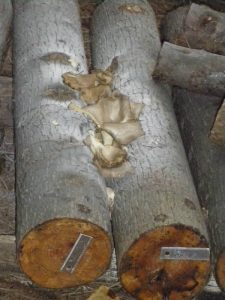 A week ago Sunday (September 5th) Paul and I attended a wonderful workshop through Common Market (a Frederick Food Co-op that we joined last year). We arrived at the Judd estate north of Frederick, traveling down the long, poplar-lined gravel driveway that opens up onto a vintage brick mansion overlooking an expanse of lush green lawn.  It was a perfect day for a mushroom workshop – clear, cool, sunny, with a light breeze.

We walked toward the house and were greeted by Chulo (“Dude” in Spanish), a polite young Rhodesian Ridgeback, and ushered into the living room by our host, Michael Judd, where we were joined by Chulo’s little West Highland Terrier pal. 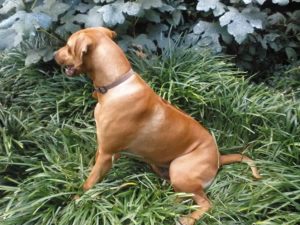 Michael is the founder and owner of Ecologia, which specializes in edible landscapes. Following a brief introduction by Common Market’s Zoe, Michael invited each of us to introduce ourselves and explain why we had come. For most of us, the answer was, “To learn how to grow mushrooms because we like to eat them.” Then we watched an 18-minute educational TED video presentation by mushroom guru Paul Stamets, in which he explained the invaluable role that fungi and mycelium play in our ecosystem. Michael added some inspirational words, grabbing everyone’s attention when he spoke of growing mushrooms on books and toilet paper rolls, and we trooped outside to grow fungi.

Together we created a “mushroom lasagna” bed in the cool shade of some pine trees, with layers of small wood chips already impregnated with mycelium from another bed, cardboard, large wood chips, mushroom spawn (wine caps),  more chips, more cardboard, water, and straw. Attendees all joined in to help – Michael wanted us to be able to fall back on muscle memory later, when we went home to grow our own mushrooms. 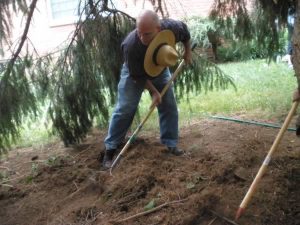 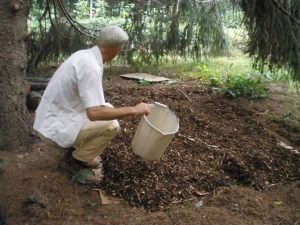 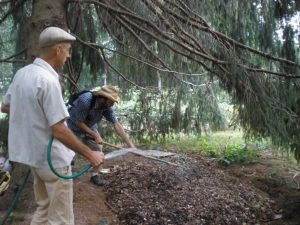 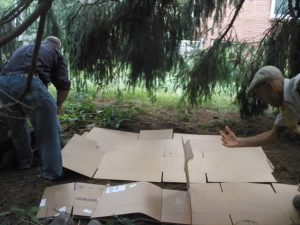 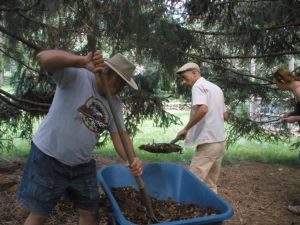 Mushroom bed completed, we went for a relaxing stroll down the driveway, flanked by a forest of tall poplars that reached toward the sky. 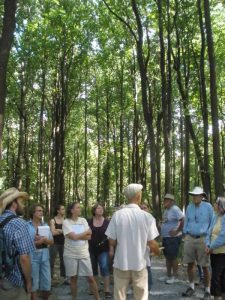 Class in the poplars

Michael located the stump in the woods from the poplar tree he had cut to create the 4-inch diameter 3-foot long hardwood logs we would take home with us at the end of the day. We drilled holes in the stump and filled them with plugs impregnated with Golden Oyster mushroom spores. “Stacking functions” – Michael calls it – making multiple uses of the resources we consume to maximize their productivity and return value back to the ecosystem. 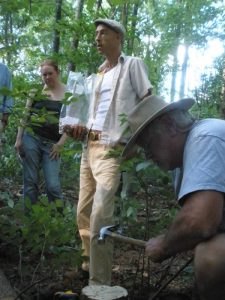 He also explained that cutting hardwood trees for mushroom logs, done properly, is an ecologically sound practice – it thins out the forest and allows for healthier growth of the larger trees that remain standing.

Next we headed back to the house to make our mushroom logs. In the shade of the back deck we drilled holes and filled them – some logs with the same plugs we had just used with the stump, others with PoHu Oyster spawn. Meanwhile, our host melted cheese wax, and when we were done filling holes we painted a cap of wax over each plug to protect it. Lots of muscle memory happening here – as well as some wonderful camaraderie between workers.

Preparing our mushroom logs (that’s me in the baseball cap) 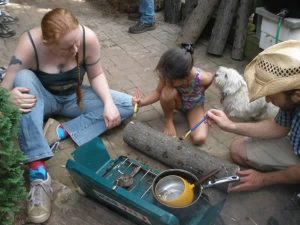 Waxing the logs, with Chulo’s Westie friend and Michael’s niece

Finally, Michael demonstrated how to build a mushroom totem – laying mushroom spawn in the bottom of a large black plastic bag, setting one of two larger-diameter logs onto the spawn, covering that log with spawn, stacking the other log on top, covering that one with spawn, topping it with an open paper bag, and tying up the plastic bag over the totem. 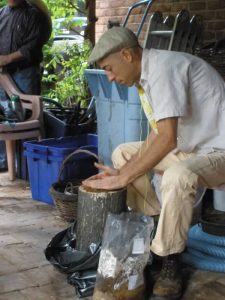 What a great day. Everyone seemed to enjoy themselves, we came away with a newfound respect for fungi and gained an astounding amount of new knowledge in a few short hours. Paul and I are both excited about our future as mushroom farmers on our Fairplay farm, and looking forward to more great educational offerings from Common Market. 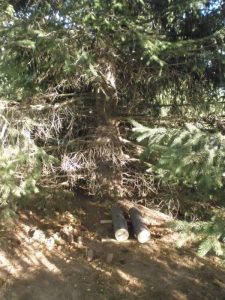 Our two logs in the shade of a pine tree at their new home (ours) – mycelium running, making mushrooms for next spring!

PICKIN’ IN THE PANHANDLE

Yesterday, we took the Harley to a terrific music festival outside Hedgesville, West Virginia, “Pickin’ in the Panhandle” – courtesy of gift-tickets from Shirley and James (my assistant and her husband). 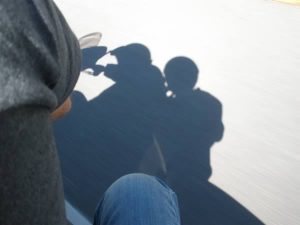 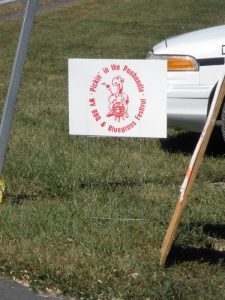 Pickin’ in the Panhandle

It was another perfect day – sunny and cool (4 layers on the bike) and a great bike ride through the Blue Ridge Mountains to “Lazy A Campground” outside Glengary, WV (check out the local post office – in someone’s garage!). 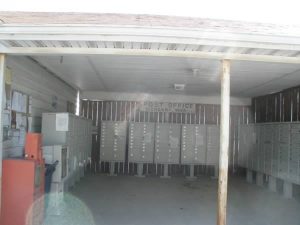 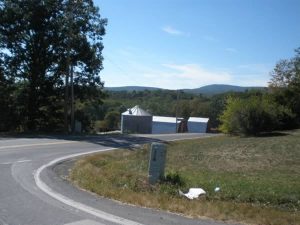 In the beautiful Blue Ridge Mountains

There was music going everywhere, constantly, with bluegrass action on two stages and lots of pickin’ and playin’ wherever two musicians happened to connect. 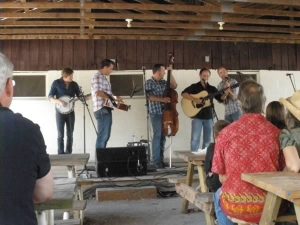 We were particularly taken by a young man named Victor Furtado (maybe 10 years old?) who carried his banjo with him everywhere, and were delighted when he excelled in the banjo division of the post-lunch flat-picking contest. 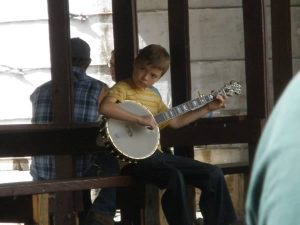 We had to leave before winners were announced, but we’re hoping he won his division!

The festival covered three days and several acres, and included a barbecue competition (we passed on that part, since we’re both vegetarian – almost – Paul still eats seafood…). There was a lot to see – with craft booths as well as music, and food, of course. And signs. You have to see some of the signs: 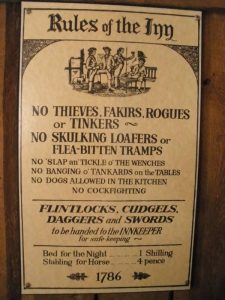 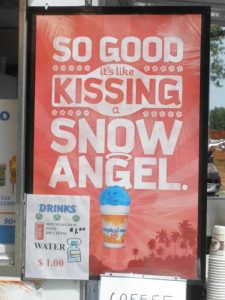 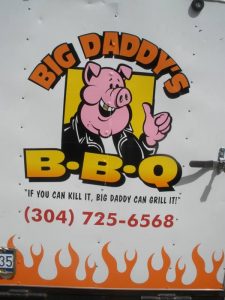 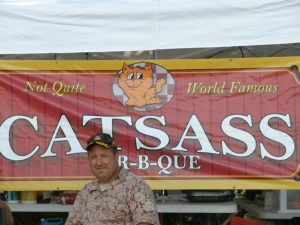 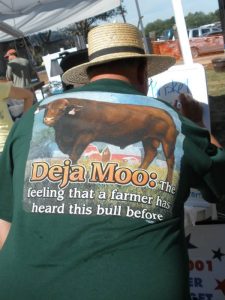 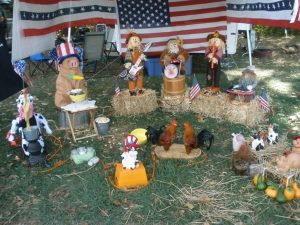 Dogs were allowed at the festival and we saw several, from Poodle, Border Collie and Pit Bull puppies, to Dachshunds, Labs and All-Americans – most wearing flat collars or harnesses (big hooray!) only one on a prong collar (boo!) – A Bernese Mountain Dog. 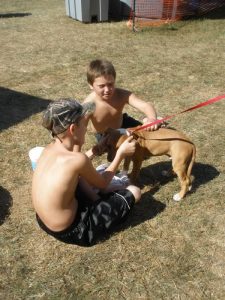 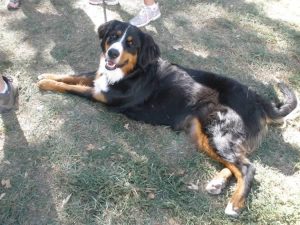 Now it’s Sunday evening – time to go feed horses, practice Sturgis’ harness behavior to get him ready for the September 25th Bark in the Park Fast-Sit Competition. Looking forward to spending this week wrapping up final details for our first-ever Level 3 Academy – Advanced Behavior Study and Training, with some of my all-time favorite trainer friends. Have a great week! 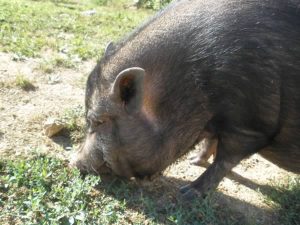 Sturgis says, “I’m counting on the distraction factor. I don’t care if I win, I just don’t want to be first one out…”

2 thoughts on “Mushrooms, Mycelium and Music”