So, every Tuesday I go to the Humane Society of Washington County to do behavior assessments for adoption dogs, and every week I manage to resist some wonderful faces and personalities. We even play an “if” game at the end of assessments… Teasing ourselves a little we ask each other, “If you had to adopt one of the dogs we assessed today, which one would it be?” I’m pretty safe playing this game – we have five dogs in the family, with no intentions of adding another permanent canine resident. Five is our limit. However, that doesn’t preclude an occasional temporary addition. Hence, Squid.

Three weeks ago we started to assess an 8-week-old Jack Russell/Chihuahua mix. He had already failed his assessment once for being ferociously mouthy, and they wanted a second opinion (mine). We started to assess, but his snuffling and sneezing convinced me he might have a little upper respiratory infection, so he went into isolation kennels for treatment for two weeks. 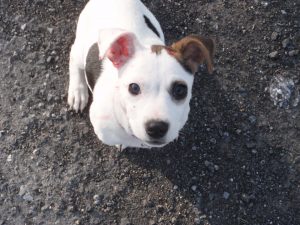 Playing with a Shih Tzu and a Schnauzer puppy in our Saturday puppy class. 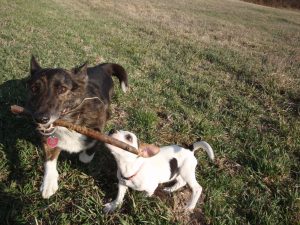 Helping Lucy fetch her stick (very bold, since Lucy does *not* share well).

So he’s actually a pretty fun project, and I’m hoping a pretty easy one. I’ve started counter conditioning his resistance to restraint and can already pick him up without any dental protest on his part. Amazing what a little “associate *that* with high value treats” can do! Actually, not all that amazing, I pretty much expected it to work, although maybe not this quickly. Next is teaching him that having someone look at his teeth is also a reliable predictor of really yummy stuff.I expect that to go quickly as well.

I’d love to hear what kind of pup you think he is, from his pictures, and my description of his personality. I see the Jack Russell, but I’m not seeing Chihuahua.  Maybe all Jack? 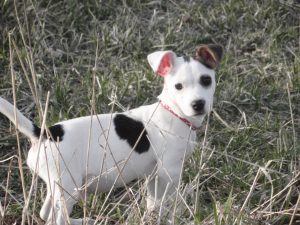 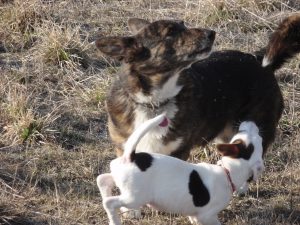 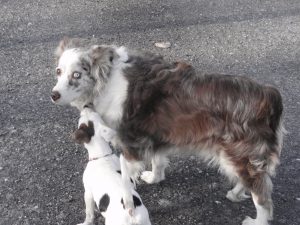 I’m thinking he’s a great candidate for flyball, and since the flyball class meets here tonight, I may just have to go out and introduce him, and troll for some prospective adopters. 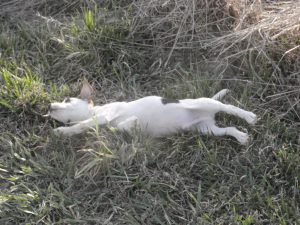 A rare, brief moment of relaxation… 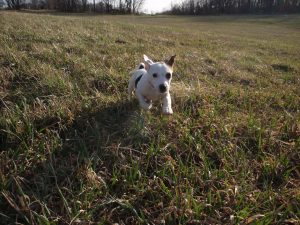 This is more in character.

I’ll keep you posted. And no, he’s not staying. Really.