Ach – our busy season is in full swing now, and it’s hard to squeeze in blogtime. But everything that happens now, I think, “Oooooh – I want to put that in my blog!” So – we’re on Day 2 of a Level 2 Behavior Modification Academy right now, with some wonderful dogs – grist for my next blog, but first I want to share our most recent Reactive Rover event with you.

Our Reactive Rover weekends are three days of intensive counter conditioning and desensitization for dog-reactive dogs. We accept up to six dogs for a weekend. We had a late cancellation for our April weekend, and only had five.

I sometimes look forward to Reactive Rover weekends with a little trepidation. I love being able to see the transformation that can occur in three days with some reactive dogs – and the delight of their humans when they see how well their dogs can, often surprisingly quickly. Sometimes, however, the weekends can be very draining. Even grueling.

But these were five fantastic dogs and their humans! We’ve had some challenging Rover weekends recently, so it was refreshing for Shirley and me to have a very successful, less stress-inducing group for a change.

We start on Friday, with half the group arriving at 8:30 to begin class at 9:00 am. This gives us time to escort teams into the training center one at a time, and get them set up in their alcoves. We work very hard throughout the weekend to avoid unexpected encounters and over threshold outbursts.

Reactive dogs come in all shapes, sizes and ages. This time, Group One consisted of: 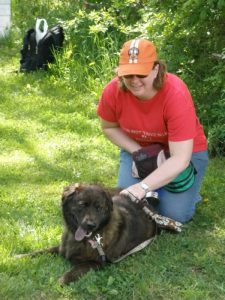 Sandy and Buddy, a 6 year old Bichon, of Reston, VA 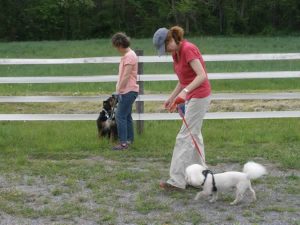 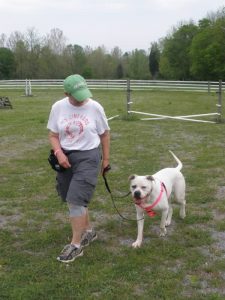 When they arrived we stashed them in alcoves to avoid arousal and over threshold barking and lunging, spent 40 minutes discussing reactive behavior and our plan for the weekend, then sent them out on an escorted hike, spaced far enough apart to prevent incidents, with RR coaches Catherine Schuler and Tracey Schowalter (www.puppyadept.com ). I’m a firm believer in the value of exercise, both because it uses up some of the energy that might otherwise feed reactive behavior, and because aerobic exercise promotes endorphin release. Endorphins are mood regulators. It’s good to take advantage of nature’s own behavior modification pharmacy whenever possible!

As Group One left for their hike, Group Two arrived: 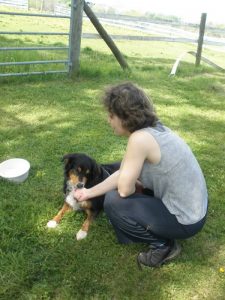 (sorry – no photo – they had to leave early, unexpectedly)

Group Two got the same discussion, and just as it was time for them to hike, Group One returned. We use two-way radios to choreograph all the teams’ movements. When Group One teams were safely stashed, temporarily, in their cars, the Group Two teams left for their hike. 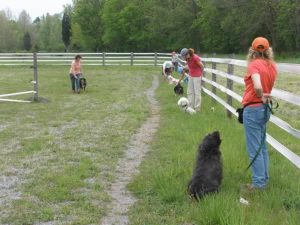 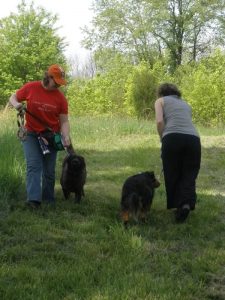 This group progressed rapidly with all of their set-ups, and by the third day all of them were able to work in close quarters with the entire group, moving randomly amongst each other, with a couple of my dogs thrown into the mix just for giggles. We often, on Day Three, have at least one or two dogs who have to work on the periphery of the close group work. Not this time – they were all superstars! 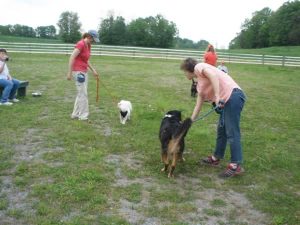 We’ve gotten a couple of glowing reports from our Roverites after they went home and put their new skills into practice:

“Buddy has done really well so far since we’ve been home- I’ve been really proud of his progress. He’s done fantastic on his walks when we see other dogs. I can’t believe I look forward to seeing other dogs on walks now, to practice what we’ve learned- what a change!

But we still needs work when we see his nemises, Shaggy. I did see a small improvement though when we saw him yesterday, and hopefully I can use what I learned this weekend to improve these sightings in the future.”

Layla has been doing great. Yesterday we sat on our front
porch…chicken in hand…and waited for dogs to walk by…which they
did…I’d say “check it out”, she’d look and eat chicken. No arousal
whatsoever. This morning we were out on our back deck and our next
door neighbor dog, who barks all the time, was out, too. I had my
handy chicken with me. Again told Layla to “check it out”…she would
look over at the barking dog and then she look back at me/chicken.
Total success.

I am now looking forward to seeing other dogs, too…Who would have
thought!

Success stories like these are wonderfully reinforcing for me, and I’m looking forward to our next Reactive Rover weekends, scheduled for June 25-27, and October 1-3. These fill up fast, so if you’re interested in bringing a dog or auditing, get on it quick!

We also have several other great workshops coming up:

And a delightful new addition to our offerings: