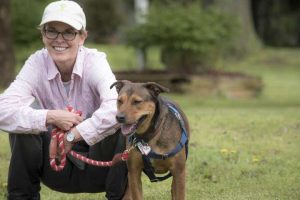 Whether you are facing the challenge of housetraining a new puppy or retraining an adult dog with inappropriate bathroom behaviors, the approach is the same: manage the behavior to prevent mistakes from happening while you teach appropriate toilet habits. The differences are that while a puppy may not yet have the physical ability to control his need to eliminate for long periods, at least he probably hasn’t learned to soil indoors and will have a very strong instinct to keep his den clean. The unfortunate exceptions are puppies raised in very dirty conditions (like many of the puppies raised in puppy mills and sold through pet stores), and those who have been forced to soil their crates repeatedly through improper confinement.

A healthy adult dog is perfectly capable of controlling his elimination urges, so in some cases an adult dog can be housetrained very quickly, especially if she hasn’t spent much time indoors. If, however, she has a longstanding habit of urinating and/or defecating indoors, reliable housetraining can be a frustrating goal to achieve. In these cases we sometimes must settle for managing the behavior in order to prevent house soiling.

We use the “umbilical approach” to housetraining puppies and adult dogs. This means that the dog is always either in a crate or pen, on a leash attached to you (or restrained nearby), under the direct supervision of an adult or responsible teen, or outdoors. Establish a daytime routine – go out *with* the dog every one to two hours. (If you want him to use a particular bathroom area of the yard, always take him on leash to this same spot when you go out with him.) Do not just send him out to “do his business” on his own. You won’t know if he did anything or not, and you won’t be able to reward him for doing the right thing. Go with him. When he urinates or defecates, Click! the clicker (or tell him “Yes!”) and feed him a treat. Then play with him for a few minutes before bringing him indoors, as a reward for going. If he doesn’t go, bring him back in, put him in his crate, and try again in a half-hour or so. When you know he is “empty” you can give him some relative but still supervised freedom for a half-hour or so.

If you catch him in the act, calmly interrupt him and take him outside to his bathroom spot. Again, do not punish him. If you do, you will only teach him that it isn’t safe to toilet in front of you, and he will learn to run to the back bedroom to do it.

Keep a daily log for one week, writing down when (and what) he goes. Once you have this documentation of his routine, you can start reducing the number of times you take him out, based on his elimination schedule. As he becomes more trustworthy, you can start to give him more freedom. If he backslides it is your fault, for giving too much freedom too soon. Back up to a more restricted routine, and proceed more slowly.

At night he should be crated, in or near your bedroom. If he wakes up in the middle of the night and cries, he probably has to go out. You must wake up and take him out, Click! and reward when he goes, then bring him back and immediately return him to his crate. We don’t want to teach him that crying at night earns a play session!

Dogs do not house soil out of malice or spite. They just don’t think that way. If your dog urinates or defecates every time you leave him alone in the house, chances are it is related to stress, perhaps separation anxiety, not malice. Punishing him will only make him more stressed, and make the problem worse. If you are having serious housetraining problems, you may need the services of a trainer or behavior consultant. The majority of dogs, thank goodness, want to keep their dens clean and will happily learn to use appropriate bathroom spots if given the chance. Just one of the many things we love about them…